Container cranes, also known as  ship-to-shore cranes or handling gantry cranes, represent an assemblage of cranes used to load and unload intermodal containers (a container that can be reused for different purposes like transport or storage it is also called freight container, as it is used to move raw materials from one location to another) from container vessels. They are found at container terminals (points where containers are switched from one means of transport to another).

Ship to shore cranes are made of two main components: a framework of steel bars raised on side supports to bridge over or around something and a mobile platform (“spreader”). The former has large dimensions so it can transport containers across a quay or yard. The latter, that is the spreader, is the element connected to the container, gripping and picking it up. 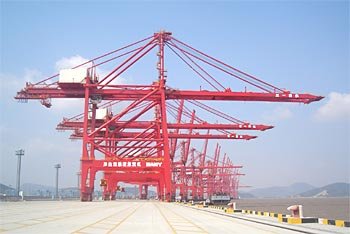 By means of a “twist-lock” mechanism, the spreader fasten to the four locking points of the container, called corner castings.

In general, an ordinary crane picks up one container at once, but recently there have been designed models that can transport up to four containers at once.

The first of these crane dates back to the early 1960s and was built by Paceco Corp. It was called Portainer and was first employed in a marine terminal in Alameda, CA by Matson company.

The ship-to-shore crane is of two types: high profile and low profile.

The first type, the high profile cargo crane is used in marine terminals. It's boom is hinged to the crane structure so that it faces the waterside. Due to the fact that the boom is lifted, ships can be cleared for navigation.

The low profile type has a boom which can perform more complex moves, being pulled towards and over the ship. This type is usually used in container terminals from airports. 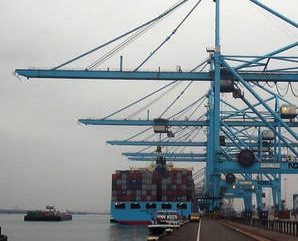 As the designing and manufacturing processes are concerned, they are quite long and complex. In some cases (for instance, on converted oil tankers), the cranes are already assembled when welded to the deck of the ship, and it takes two years to deliver them.

The best route isn't necessarily the shortest. Favorable weather plays an essential role in transporting a gantry crane, as the itinerary changes according to the daily forecasts.

Each crane is 103 meters high and weighs 1,250 tonnes. To manufacture one container crane, costs can reach the sum of US$10 million. 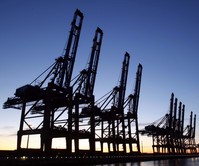 The major criteria in classifying cranes by size are their lifting capacity and the size of the container ships from which they load and unload containers.Taking the latter criterion into consideration, there are three types of cranes:

In order to power such a crane, two sources of power are used. One is represented by generators driven by diesel engines (placed on top of the crane). The other source is electric power from the dock (shore power), which is also the most common. Alternative current from 4,000 up to 12,000 volts runs through the shore power system.